Mahogany Monkey - the birth of a band

The origins of Mahogany Monkey...

at Lawnswood School in 1996 at the age of 13 - but this opened up a whole new set of possibilities.

We were now thinking we should add a drummer, with the possibility of using a full drum kit for occasional gigs. Tom Dunderdale was the drummer in the rock band - we asked him, and he was also very keen.

We tried out bits of material in various combinations for a couple of months, and when we finally all got together we had a set worked out, and gigs lined up for April onwards, so hit the ground running.

We played a very rough and ready practice gig at a singaround in Wrenthorpe, near Wakefield, in March, and then had a first proper gig booked at the Chemic in Leeds. Unfortunately Barry was ill for that gig, so I took over vocal duties. The first time we actually performed together as a full six piece band was on Friday 23 April 2010 at the Appletreewick Festival."

join us and play folk music, something that was entirely new to him. 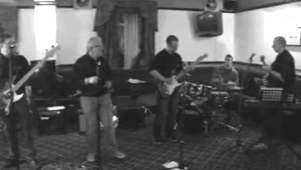 Alec, Tom, and Richard, in "The Other Band", with, on the left, Mat Clay, and vocalist Andy Dunderdale

Around the same time I was talking to Patrick Gilligan, who happened to be a rock bass player as well as daughter Sophie's partner, and raised the possibility of his joining the new project. Both Alec and Patrick were enthusiastic.

Then over the Christmas holiday Sophie, herself an accomplished musician, said she'd like to be in the band. This was an unexpected development - Sophie had always refused to be part of any of 'dad's' musical projects, apart from one breathtaking performance of Irish jigs

I sat in with Dave Allen and Barry Smith - 'The Allensmith' - while on a gig with the duo 'Mixing up the Medicine' early in 2008. They asked me to join them for other gigs, and so 'The Allensmith' became a trio for most of 2008 and 2009. 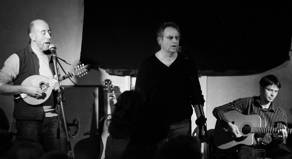 Richard, Barry, and Dave Allen in the Allensmith

Towards the end of 2009 The Allensmith was looking very shaky, partly because we lived so far apart and partly because of Dave's work commitments, and we were looking for an alternative project. We came up with a big idea, to use the Allensmith concept - Irish folk played to a rock beat - as the basis for a bigger, more hard edged band.

I was playing in a rock band with guitarist Alec Taylor, so we asked if he'd like to